Are Arab Women at higher risk for lung cancer?

Lung cancer is the most common cause of cancer-related death among men and women in Western countries.  Lung cancer prevalence correlates directly with rates of smoking, as this remains the number one risk factor.  The Western world has done an excellent job reducing smoking prevalence in society, via aggressive anti-smoking campaigns.  The current prevalence of smoking in adults in the US is 16.7% in men and 13.6% in women. However, smoking remains a very common social activity in the Middle-East, and unfortunately, due to the lack of public education efforts, low regulatory environments and increased tobacco marketing, the rates of smoking remain high, and on the rise, especially among young adults.  In addition, smoking of water pipe (Hookah or shisha) is a very common habit in the Middle East, and the effects of this activity on the rates of lung cancer are just becoming understood.

The current rates of smoking in the Middle East are very worrisome.  A report by the World Health Organization (WHO) revealed that the Middle East is one of only two regions in the world where cigarette consumption increased in the past few decades (WHO, 2018). In Lebanon in particular, there is a high prevalence of smoking among male adults with rates in the range of 50–60%.  A more concerning fact is that women in Lebanon, exhibit the highest age-adjusted smoking rates among females in middle-eastern low middle-income countries with a prevalence of 34.1%.   In Jordan, 80.4% of adult men are considered smokers, the highest in the region.  Alarmingly, a recent report indicated that the per capita cigarette consumption rate in Lebanon rose by 475% in the last few decades, the second highest increase globally, placing the country as the third worldwide in annual cigarette consumption per capita for both genders.  These alarming rates will for sure translate into a significant rise in the diagnosis of lung cancer, in the next 30-40 years.  The most common cancer in women remains breast cancer; however, the curability of this disease is high if caught early.  On the contrary, Lung cancer remains a deadly disease, but screening, when done based on guidelines, can reduce mortality by 20%.  While women tend to be cognizant of screening mammography, due to public education and various endeavors promoting mammography by multiple international foundations, the concept of lung cancer screening is far less discussed or performed in the Middle East.  Lung cancer screening is a new concept in oncology.  The guidelines for screening individuals at high risk have only recently become available to healthcare providers.  Physician education and government-sponsored campaigns need to be implemented, to make this modality widely available and established for individuals at high risk. 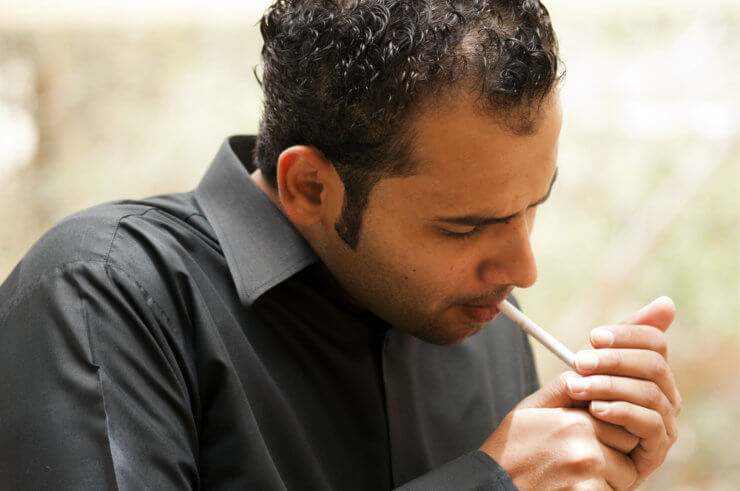 Lung cancer is preventable (maybe not completely)! Since smoking is the number one risk factor for lung cancer, and accounts for 85% of the diagnoses, reducing smoking translates into lower lung cancer rates, and consequently, lower lung cancer mortality.  Although lung cancer can still develop in never smokers, this only accounts for 10-15% of the cases diagnosed.  A serious effort by the governments in the middle-east should be made to reduce smoking.  The western world has been able to achieve it, and there is no reason why it cannot be achieved in developing nations, with commitment from governments.  Interventions like restrictions of public smoking in restaurants and public spaces are the first step.  Other methods include higher taxes on cigarettes, warning images and messages on cigarette boxes, and certainly, age restriction on the purchase of cigarettes.  The most successful strategies include mass media campaigns, multicomponent community programs and comprehensive nationwide tobacco control programs.

Another concerning habit is the smoking of hookah.  It is estimated that approximately 100 million people worldwide smoke tobacco in this manner using variations of the water-pipe.  There is a misconception that this activity is safer, healthier and non-addictive than cigarette smoking.  This is not true; in fact, a recent study that analyzed the content of hookah smoke and compared it to cigarette smoke has shown that water-pipe smoking generates ambient carcinogens and toxins equivalent to 2–10 cigarettes in 1 h of use.  A more concerning fact is that Lebanese youth, aged 13-15 have a very high water-pipe smoking prevalence of 59.5%.  This is based on surveys done on high school students.  This is extremely alarming, as the effects of carcinogens on the developing tissues of these young adults is far worse, and the addictive effects will guarantee that these individuals will become life-long smokers.  I see this as a medical emergency, and I believe that the medical governing body in middle-eastern countries need to take charge of educating young adults and modifying their behavior.

Finally, the answer to the title question is yes, due to behaviors and not gender genetics.  Arab women, especially Lebanese women, are at increased risk for lung cancer due to their significantly high rates of smoking.  If an intervention is not instituted, we are going to see a significant rise in lung cancer incidence in women in the next few decades.  We can learn from the experience in the West and not wait until this public health emergency develops.