Osteoblasts and osteosarcoma cells originate from mesenchymal stem cells. Although osteoblasts undergo multiple differentiation steps, the differentiation of osteosarcoma cells is impaired so that they remain as immature osteo- blast-like cells (1). Osterix (Osx) and Runt- related transcription factor 2 (RUNX2) are osteoblast-specific transcription factors necessary for the differentiation of osteoblasts and bone formation. Stein et al. (2) concluded that RUNX2 has a dual function in osteoblast proliferation and differentiation. It enhances their maturation by supporting the exit from the cell cycle and attenuation of osteoblast growth and activates the genes of osteoblast maturation to promote bone cell phenotype development and lineage commitment (2). RUNX2 induces BAX expression and increases the sensitivity of sarcoma osteogenic (Saos2) cell lines to apoptosis (3). Inversely, Martin et al. (4) found overexpression of RUNX2 mRNA in patients with osteosarcoma, leading to a poor response to chemotherapy compared to the good response in patients with other types of tumors. Osx is an important osteoblast-specific transcription factor that plays an essential role in osteoblast proliferation and differentiation (1, 5). It binds to substance P (Sp)-binding sites on gene promoters to regulate their expression. According to Cao et al. (6), Osx transcript decreased in three human and two mouse osteosarcoma cell lines compared to normal cell lines. Moreover, transfection of a mouse osteosarcoma cell line with the Osx gene resulted in the inhibition of tumor incidence, growth and volume (6).

Osteoclasts are cells derived from the monocyte/macrophage lineage and play an important role in bone metabolism through their engagement in the bone resorption process. The tumor necrosis factor (TNF) family consists of several ligand-receptor proteins that play a role in several cellular processes including apoptosis, homeostasis and development (7). One of such proteins is the receptor activator of nuclear factor kappa-B ligand (RANKL), which is very important for the activation, formation, and function of osteoclasts (8). RANKL is expressed and synthesized by different types of cells such as osteoblasts and bone marrow stromal cells (8). On the other hand, RANK, the receptor for RANKL, is another member of the TNF family, which is mainly expressed on the cells of the monocyte/macrophage lineage such osteoclasts and pre-osteoclasts (7). The RANKL/ RANK interaction is essential for osteoclastogenesis as it stimulates the differentiation and maturation of osteoclasts (9). RANK expression is  regulated by TNF-α, parathyroid hormone-related protein, transforming growth factor-α, interleukins (IL-1, IL-6 and IL-8) (10). Activated osteoclasts attach to the bone and release various proteases, which facilitate the resorption of the non-mineralized constituents of bone (11).

Berberine is a quaternary ammonium salt that belongs to the family of isoquinoline alkaloids. It is found in several plant species such as Berberis aristata, Hydrastis canadensis (golden- seal) and Coptis chinensis (12). Several studies have shown the anticancer properties of berber- ine against different types of cancers, including leukemia, osteosarcoma and colon cancer (13– 15). On the other hand, hyperthermia (39–45°C) has been shown to be a powerful enhancer for chemo- and radiotherapies through the elimination of treatment-resistant tumor cells (16).

Mantena et al. (17) reported that treatment of human prostate cancer cells with berberine led to G1-phase arrest with suppression of cyclin-dependent kinase (CDK) 2, CDK4, and CDK6 proteins. Additionally, a recent study showed that berberine alone or in combination with doxorubicin led to G2/M arrest in human breast cancer cells (18). However, published data on the effects of berberine chloride, hyperthermia or their combination on osteogenesis and tumor cell differentiation are still very scarce. Therefore, the present study aimed to investigate the effects of berberine chloride and various heat conditions on the gene expression of Osx, RUNX-2, RANKL, cyclin-dependent kinase 2 (CDK2), CDK4, IL-6 and IL-11.

Human MG-63 Osteoblast-like osteosarcoma cells were obtained from the American Type Culture Collection (ATCC, Manassas, VA, USA) and cultured in Dulbecco’s modified Eagle me- dium: nutrient mixture F-12 (DMEM/F-12) with 10% fetal bovine serum and 1% streptomycin and penicillin (Life Technologies, Grand Island, NY, USA). Culture media were changed every 48h. The cells were sub-cultured in an atmosphere of 5% CO2 at 37°C overnight and then trans-ferred to a different incubator with the required pre-adjusted temperature.

Six groups of MG-63 cells were treated with hy- perthermia for 1 h: two with mild, two with moderate and two with severe hyperthermia (at 39, 43 and 45°C, respectively). After treating the cells with hyperthermia, a low dose of berber- ine chloride (80 µg/ ml) was used for treating one group of mild, moderate and severe hyper- thermia (combination). Then, all treated groups were recovered at 37°C for 24 h, and all groups were treated with hyperthermia (at 39, 43 and 45°C) for a second time (1 h) and were recov- ered at 37°C for 3 h.

The RNeasy Mini Kit with on-column DNase treatment step (Qiagen, Hilden, Germany) was used for RNA extraction. Genomic DNA was eliminated by mixing 2 µl of DNA elimination buffer (Qiagen, Germany) with 1-8 µl of total RNA. The mixture was incubated at 42°C for 10 min. For cDNA synthesis, the RT2 First Strand Kit (Qiagen, Hilden, Germany) was used. Each reaction contained 1µg of DNA-free RNA (10 µl), l µl primers solution and external control mix, 4µl 5x RT buffer, 3 µl dH2O and 2 µl RT enzyme mix (Qiagen, Hilden, Germany). This mixture was incubated in a Mastercycler Gradient ma- chine (Eppendorf, Hamburg, Germany) at 42°C for 15 min. and the reaction was terminated by increasing the temperature to 95°C for 5 min. Prior to running the PCR array, 91 µl of distilled H2O was added to the cDNA and mixed gently. 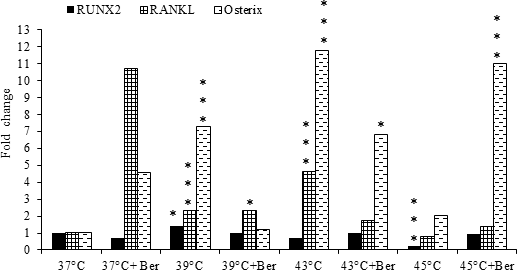 Figure 1. Effect of hyperthermia, berberine chloride and their combination on gene expression of RUNX2, RANKL and Osx

Figure 2. Effect of hyperthermia, berberine chloride and their combination on gene expression of CDK2 and CDK4

Figure 3. Effects of hyperthermia, berberine chloride and their combination on gene expression of IL-6 and IL-11

In the present study, berberine chloride led to the suppression of CDK2 and CDK4 mRNA expression. This finding is in agreement with a previous study that showed G1-phase arrest with suppression of CDK2, CDK4 and CDK6 pro- teins in human prostate cancer cells exposed to berberine chloride (17). Additionally, a recent study showed that berberine alone or in combination with doxorubicin led to G2/M arrest in human breast cancer cells (18).

In the present study, severe hyperthermia alone significantly suppressed RUNX2 expression, which declined to near normal levels of control after combination with berberine. It is worth mentioning that thermal stress induces the expression of alkaline phosphatase, RUNX2 and Osx in mouse osteoblast MC3T3-E1 cells (19). Osx was upregulated in all groups. Overall, the present study showed that hyperthermia may induce differentiation of osteosarcoma cells. Kajiya et al. (19) reported that photothermal stress promotes mineral deposition in enhanced tooth-extracted sockets. On the other hand, it has been reported that berberine activates RUNX2 by p38 mitogen-activated protein kinase, leading to increased expression of osteogenic marker genes involving osteocalcin and osteopontin (20). In the present study, berberine-induced upregulated levels of Osx are consistent with the findings by Lee et al. (20) in normal osteoblasts.

RANKL is important for osteoclastogenesis (21), where both RANKL and osteoclastogenesis were found to be downregulated by berberine (22). Therefore, berberine has been suggested to be useful in the prevention of osteoporosis (22). It is noteworthy that increased osteoclastic activity in osteosarcoma is a sign of increased tumor cell invasion (11). This could explain the inhibitory effect of berberine on osteoclast formation in osteosarcoma and, therefore, its protective action against cancer cell invasion.

This study was conducted on one cell line with a single dose of berberine chloride, and no protein expression assays were performed due to the time and budget shortages. Thus, further studies are recommended to investigate the re- sponse of more osteosarcoma cell line types to the combined effects of berberine chloride and hyperthermia.

Berberine chloride suppresses cell cycle genes when used alone and in combination with mild or moderate hyperthermia. In addition, it induces Osx expression when used alone or in combination. Therefore, berberine chloride and hyperthermia could be effectively used in promoting osteosarcoma differentiation and, therefore, help in the treatment of osteosarcoma.