Endometrial cancer is a multifactorial disease. Obesity and long‑term therapeutic administration of estrogen are the most common risk factors, while pathological production of estrogen has also found to be associated.[6‑9] In addition, nulliparity and infertility are among factors that increase the risk of endometrial cancer.[10]

Endometrial cancer is classified into Type I or Type II, based on clinical and pathological differences. Type I endometrial cancer accounts for 80% of  all cases and    is linked to excess estrogen exposure. It is associated with  low‑grade  tumors  and  has  a  good  prognosis.[11,12] Type II accounts for 20% of all new cases of endometrial cancer and is a highly differentiated papillary serous‑cell carcinoma that is not linked to estrogen exposure. It is commonly detected at later stages and is associated with poor prognosis.[11]

Genetic mutations in cancers have been shown to  be influenced by patients’ ethnicity and grade of tumor.[13‑20] These variations in mutations affect therapeutic regimes.[21‑24]   Conceptually,  precision  medicine  requires knowledge of the exact mutation present in each patient along with the tumor stage. Currently, there is a lack of data regarding genetic mutation frequencies (GMFs) in endometrial cancer patients of different ethnic groups and tumor grades. To obtain significant data regarding any such differences in mutation frequencies, a large‑scale, multicenter study that includes endometrial cancer patients with different ethnicities and tumor stages is required. However, such studies are difficult to conduct and require concerted efforts at several levels. Nonetheless, an analytical study of large‑scale endometrial cancer genomics datasets can provide initial data on GMFs of different ethnic groups and tumor grades. Accordingly, this study was conducted using cBioPortal, an open source database of large‑scale cancer genomics data sets, to search for variability in genetic mutations of endometrial cancer in different ethnic groups and stages.

To assess the GMF of different ethnicities, the Uterine Corpus Endometrial Carcinoma (TCGA, PanCancer Atlas) database was used through cBioPortal.[25] For GMFs of different grades, information was obtained from the Uterine Corpus Endometrial Carcinoma (TCGA, Nature 2013) database.[26] Finally, the Kaplan–Meier method was used to determine the survival rates of endometrial cancer patients in the GDC Data Portal database of cBioPortal.[27] The frequencies of genetic mutations were then normalized to the total patient number in each group using Microsoft Excel for Mac 2011. Using Prism 7 for Mac software (GraphPad Software, La Jolla, CA, USA), a heat plot of the genes most frequently mutated was generated for each ethnic group and grouped for analysis of different tumor stages.

This work used anonymous, open‑access data, and thus did not involve any personal information of individuals. 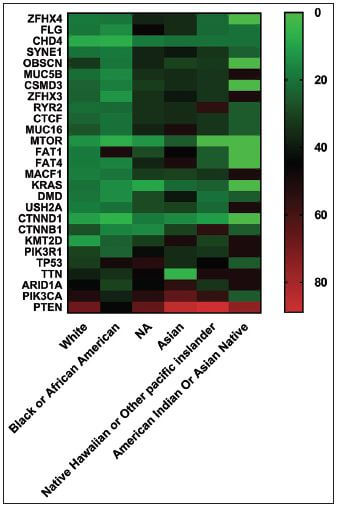 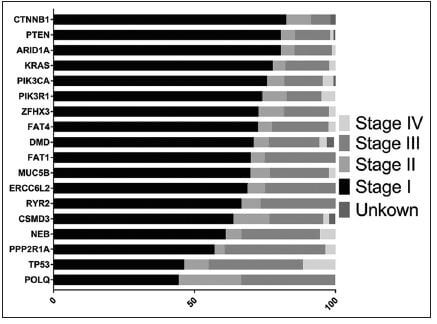 Genetic mutations in cancers are likely to be influenced by patients’ ethnicity and grade of tumor.[13‑20] However, there is a lack of knowledge on GMFs in endometrial cancer patients of different ethnic groups. The current analytical study found that GMFs in endometrial cancer patients vary by ethnicity. Variations in GMFs can help understand biological differences between ethnic groups, which in turn could be used for targeted therapy. Further, this study also demonstrates altered activity of certain genes during different cancer stages.

In African Americans with prostate cancer, recurrent loss‑of‑function mutations has been shown in the ERF gene, which is a tumor suppressor gene.[28] Increased mutations in KRAS have been reported in African Americans with colon cancer compared with Caucasians patients.[29] In non‑small cell lung cancer, Black women have been found to be at a higher risk of EGFR mutations than White women.[30] BRCA1 mutations in breast cancer patients have been shown to be more prevalent in Hispanics compared with other ethnicities.[15] Further, BRCA1 exon 2 mutations are more frequent in Ashkenazi Jewish women relative to Caucasians.[31] Such differences in GMFs between women of different ethnicities were also observed in several other studies.[32‑34] These and the current study results collectively show that genetic mutations vary by ethnicity, and thus could potentially be used to determine and administer precise therapy for a subset of patients within an ethnic group. Therefore, a larger study, including more ethnic groups, could potentially aid in improving endometrial cancer diagnosis and therapy.

The current study also demonstrated differences in the mutation frequency between endometrial cancer stages, which could potentially be used to better understand the progression of cancer and to monitor its treatment. The frequent  mutation of PTEN in early‑stage  endometrial cancer has also been suggested previously.[35] However,  in that study, endometrial carcinoma PTEN mutations were compared with that of endometrial hyperplasia, thereby limiting the validity of  the finding. Therefore, a large population study should be conducted to elucidate the genetic mutation patterns in each stage of endometrial cancer. This would further contribute to the implementation of precise therapy. Previously, in studies of other cancers, GMFs have been found to vary in different stages of cancer.[36‑40] However, to the best of the author’s knowledge, this is the first study demonstrating GMF variation in different stages of endometrial carcinoma.

Endometrial carcinoma is characterized by mutations in many genes, with microsatellite instability genes PTEN, KRAS, PIK3CA and β‑catenin most commonly involved.[19,41‑43] The  mechanisms that initiate and drive endometrial cancer have been explored. Mutations in the pro‑survival genes, such as KRAS, Akt, mTOR and β‑catenin, or pro‑apoptotic genes, such as PTEN and p53, have all exhibited a role in the pathological findings of this

cancer.[44‑46] Understanding the molecular background of uterine cancers could help in determining future therapy for endometrial cancer.[44‑46] Small molecules capable of targeting and inhibiting these genes have been found to potentially reduce mortality rates of endometrial cancer patients.[45] Further, inhibitors can be combined with hormonal or cytotoxic agents, thereby focusing on multiple targets.[46] For example, the PI3K/AKT/mTOR pathways have been used for uterine cancer therapy.[12,47] In fact, the effectiveness of mTOR inhibitors such as AZD8055, OSI‑027 and INK128 for treating endometrial cancer are being evaluated in clinical trials.[48] Other inhibitors have also been tested in vivo but have not yet been introduced into trials.[46]

The results of this study’s survival rates of patients could potentially be used as prognostic markers for clinical outcome. This study found that mutations in TP53 and PIK3R1 are correlated with poor prognosis in endometrial cancer. These results conform to the findings of previous study results on other cancers. For example, TP53 has been shown to correlate with poor prognosis in breast cancer,[49,50] lymphoma,[51] colon cancer,[52] lung cancer[53] and leukemia,[54] while PIK3R1 is associated with poor prognosis  in  glioblastoma.[55]   In  patients  with  late‑stage endometrial cancer, poor prognosis may be related to the observed increased frequency of TP53 mutations.

It should be noted that because the current study is a retrospective study that is more exploratory and hypothesis generating in nature, its findings cannot be considered conclusive. Therefore, future work should comprise large sample sizes, including more ethnic groups such as Arabs from different countries, and long‑term follow‑up, including detailed information on patient body weight, morbidity, mortality and treatment regimens administered.

The findings of the current retrospective study illustrate a new GMF profile for endometrial cancer patients of different ethnicities. Further, this study demonstrates the altered activity of certain genes during different cancer stages and that the survival rates of patients with endometrial carcinoma could be predicted using the set of genes investigated. Nonetheless, to validate the findings of this study, future prospective studies should be conducted with large sample sizes, more diverse ethnic groups and long‑term follow‑up.