CAR T-cell (chimeric antigen receptor T-cell) therapy is a recent, exciting advancement as a form of immunotherapy, offering a new, final treatment option for patients with diffuse large B-cell lymphoma and acute lymphoblastic leukaemia – aggressive forms of blood cancer – when other treatments have not had the result needed from conventional treatment.

The concept of CAR T-cell therapy was born from the clinical community’s growing understanding why T cells – which our immune system uses to identify and fight infections – are not able to recognise and kill cancer cells. We now understand how cancers have developed means to make themselves invisible to the immune system and actively switch off the T cells and other immune cells that would attack them.

With CAR T-cell therapy, you genetically introduce what we call chimeric antigen receptors (CAR) into the patient’s own T cells. CAR T cells are genetically engineered T cells containing CAR receptors, which are a class of synthetic receptors that re-programme T cells to attack cancer. They are derived from a CAR construct which consists of an extracellular tumour antigen targeting binding domain, a hinge region, a trans-membrane domain that anchors the CAR to the cell membrane, and an intracellular domain which leads to cell signalling. 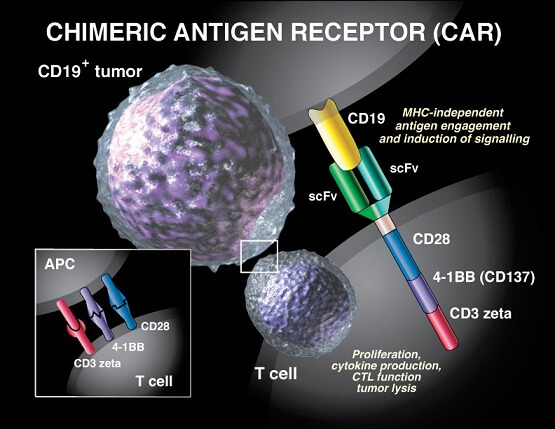 The CAR therefore has two distinct parts, each with a different task. The extracellular part targets a protein called CD19 on the surface of the lymphoma cells allowing the CAR T cells to bind to the tumour. The patients’ own T cells are used and are collected from the patients’ blood by a well-tolerated process called leukapheresis. Following collection of T cells, these are then sent to the clinical good manufacturing practice (GMP) cell manufacturing facility, where the cells are genetically modified and expanded outside of the body and then frozen and sent back for infusion to the patient. 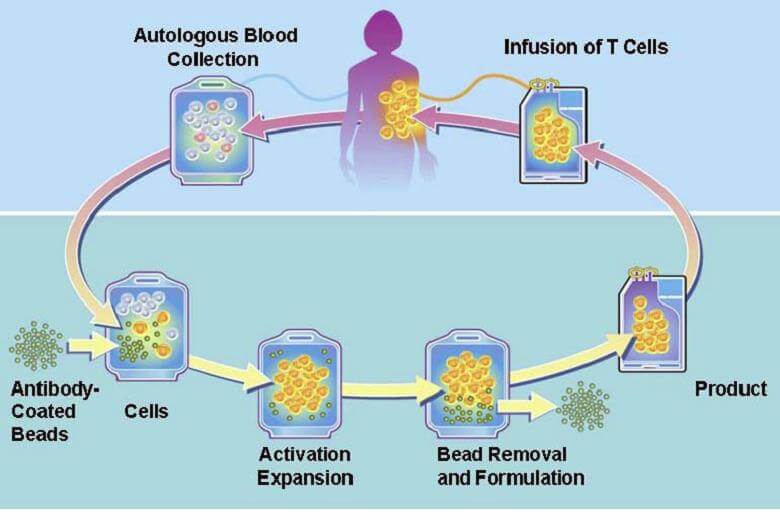 The intracellular part of the CAR T cells process consists of two portions, one part activates the T cells (CD3 zeta) to kill the target tumour cells and the other costimulatory domain sends a signal for the T cells to proliferate leading to a huge and rapid expansion of the modified T cells in the patient. Unlike the patients’ own T cells, cancer tumour cells cannot switch off these modified T cell.

This is encouraging because if the patient responds as we hope, we are unlikely to see a late return of the cancer. There are no guarantees, but the fact that there is some uncertainty about the future is still a vastly better scenario than we have ever been able to offer these patients before.

Everyone is very focussed on making this as safe as it can be. There is no evidence to date the introduced gene can integrate into the normal part of the genome in ways that cause unintended genetic switching within the cell. Also, the way this gene is delivered into the T cells means it should never migrate to other cells, and so far no-one has found any evidence of the gene migrating elsewhere. The gene modification remains restricted just to the CAR T cells and has not been found in any other T cells in the immune system.

The side effect profile of CAR T cells relate to the way that the T cells work to attack the cancer. Patients often develop high spiking fevers, feeling very flu-like and extremely unwell as the activated T cells release chemicals or cytokines that signal to the immune system to attack the cancer in the same way that T cells would fight off a viral infection. In some individuals, the effects can be serious enough for them to need careful monitoring in an intensive care unit (ICU). There is also second potential problem: a neurological toxicity that significantly impairs the patient’s ability to think clearly. What seems to happen is that the brain swells. This needs medication to combat, requiring time in an ICU. You need a neurologist involved in monitoring patients during treatment as part of a multidisciplinary clinical team. Both of these side effects settle as the cancer is attacked and the T cells settle down within the patient.

When you can support the patient through both these side-effect complications, they are fully reversible. A longer-term side effect is caused by the fact that the CD19 protein we are targeting is also expressed on your normal B cells, which are a type of white blood cell that works as part of the immune system by secreting antibodies. The treatment can deplete the patient’s healthy B cells, leaving them with low antibody levels and more prone to infection. Some people need to have immunoglobulin replacement therapy until these B cell levels recover.

CAR T-cell therapy is only given once. This is because the cells multiply enough to eradicate even large amounts of tumour. T cells are also very long lived and ideally will be around long enough to kill all the cancer cells. After this, they either disappear or fall back to very low background levels and become part of the normal immune surveillance system. The huge advantage over chemotherapy is that while chemotherapy kills the cancer cells, it only lasts a day or so, leading to repeat treatments whereas the CAR T-cells continue to function as long as there as still tumour cells driving the T cells to expand.

This treatment is not chemotherapy-free and it’s extremely important for potential patients to realise this. We use chemotherapy to kill some normal cells and create room for the implanted CAR T cells to expand. This is essential to allow sufficient expansion of the CAR T-cells to be able to fight the cancer cells. It also reduces the patient’s own immune system, so it does not try to reject the new cells. Another factor is that these can be very aggressive cancers and the patient may need chemotherapy to keep their situation stable while their T cells have been sent away to be modified, which takes several weeks.

I am excited by CAR T-cell therapy’s ability to adapt the patient’s own immune system to fight cancers. While chemotherapy can be very effective and has saved many lives, it’s a very toxic process which can take a real toll on some patients and be too much for others to go through. CAR T cell therapy is one of a group of therapies called adoptive cellular therapies, where we make targeted modifications to the patient’s immune system to fight specific cancers. The licensed products target CD19 present on the surface of lymphoma and B cell leukaemia cells, but clinical trials are underway designed to kill cancer cells expressing other cancer antigens, including multiple myeloma (https://www.ncbi.nlm.nih.gov/pubmed/31042825) and a variety of solid tumours including pancreatic cancer (https://www.ncbi.nlm.nih.gov/pubmed/31420241). As these trials produce exciting results we shall see the emergence of CAR T cell products for a large number of cancers, although only two CD19 CAR T cell products are currently licensed for use in the USA and Europe.

We are in the very early days, but these therapies are highly likely to be transformative for cancer treatments. It is extremely attractive to use a patient’s own immune system to fight their cancer, rather than use toxic chemotherapy. It will be a long and difficult road to get there, but I can see a time when we will look back at the use of toxic chemotherapy chemicals in treating cancer in the same way as the concept that leeches were once considered good medicine. 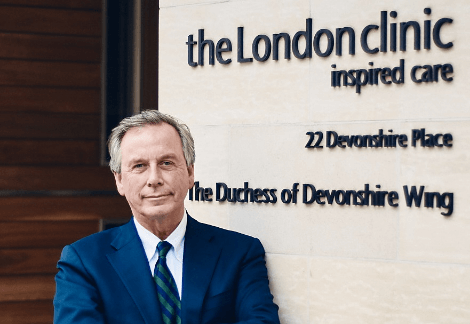